2018’s Box Office continues to deliver the goods, this time in the form of a record-breaking Thanksgiving holiday led by the impressive performances of ‘Ralph Breaks the Internet’ and ‘Creed II’.

Still, this time around gave us ‘Ralph Breaks the Internet’, which warmed the hearts (and wallets) of cinemagoers and earned a smashing $84.8m, including $56.2m from Friday to Sunday. It becomes the second biggest Thanksgiving opening of all time, beating out the likes of Disney companions ‘Coco’ ($72.9m) and ‘Moana’ ($82.1m), and now stands as the 13th time Disney’s topped the charts this year (from only 5 films).

‘Creed II’ was equally as impressive, with its $56m 5-day gross becoming the 7th biggest Thanksgiving opening ever, and the holiday’s largest live-action release of all time. The records don’t stop, as the film’s Friday to Sunday gross of $35.6m means it’s the biggest ever opening for a sports drama – beating 2009s ‘The Blind Side’ ($34.1m).

It marks Michael B. Jordan, Tessa Thompson, and Sylvester Stallone’s (cameos included) 2nd biggest openings ever, considering all 3’s ventures into the high-earning world of the MCU. Produced on a $50m budget, the sequel to 2015s ‘Creed’ sees Adonis Creed (Jordan) face Viktor Drago, son of Ivan, who famously killed his father in ‘Rocky IV’.

Internationally, while ‘Creed II’ only entered the U.S. market this weekend, ‘Ralph Breaks the Internet’ saw its audiences just as enthusiastic, earning $19.5m from China on its way to a $41.5m start. From just 19 countries, its worldwide total currently stands at a strong $127m.

This year’s Thanksgiving turkey goes to ‘Robin Hood’, which was put to the sword with a paltry $14.3m in its first 5 days. It somehow managed to gross below last year’s bomb ‘King Arthur: Legend of the Sword’s 3-day $15.4m opening, and its $9.2m Friday to Sunday will ensure the film goes down as one of the Box Office flops of the year.

It doesn’t get any better, as its 14% on Rotten Tomatoes should stop any chances of a semi-decent Box Office run dead in its tracks, and its international start consisting of just $1.7m from the U.K. and only $7m from 32 other countries means it hasn’t taken well across the globe. Distributing studio Lionsgate, it seems, have finished the year with a whimper, and not a roar.

The final 2 wide releases this weekend came in the form of ‘Green Book’, a critically-acclaimed biopic starring Viggo Mortensen and Mahershala Ali, and Jason Reitman’s ‘The Front Runner’, starring Hugh Jackman. It was a case of opposite fortunes, as ‘Green Book’ over-delivered on its expectations with $7.5m from just 1,000 cinemas, while ‘The Front Runner’ floundered with a poor $888k, for a total of just $1.1m.

It was a memorable Thanksgiving weekend, with records broken and ‘Ralph Breaks the Internet’ and ‘Creed II’ impressing. Will both films go onto beat their predecessors, or will sequel-itis strike again? Let us know your thoughts on Twitter and Instagram – we’re at @JUMPCUT_ONLINE. 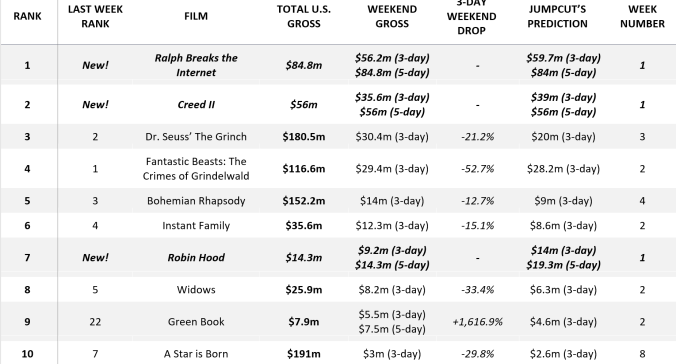