Following the global success of “Godzilla” and “Kong: Skull Island” comes the next chapter in Warner Bros. Pictures’ and Legendary Pictures’ cinematic MonsterVerse, an epic action adventure that pits Godzilla against some of the most popular monsters in pop culture history. The new story follows the heroic efforts of the crypto-zoological agency Monarch as its members face off against a battery of god-sized monsters, including the mighty Godzilla, who collides with Mothra, Rodan, and his ultimate nemesis, the three-headed King Ghidorah. When these ancient super-species—thought to be mere myths—rise again, they all vie for supremacy, leaving humanity’s very existence hanging in the balance.

‘Den of Thieves’ was in development for a whopping 14 years before it finally managed to reach our cinema screens and is Christian Gudegast’s directorial debut. But after so many years in development limbo, was anyone expecting this film to be a game changer? No? Good.

‘Den of Thieves’ is a “gritty crime saga” which focuses on the on-going cat and mouse game between ‘Big Nick’ O’Brien (Butler), who works for the L.A County Sheriff’s Department , and Ray Merrimen (Schreiber) who is an ex-veteran-turned-bank robber that has a string of successful robberies under his belt that O’Brien can’t charge him for due to lack of evidence. When Merrimen and his gang steal an armoured truck and leave a handful of dead officers on the pavement, O’Brien sets out to put Merrimen behind bars once again.

The lines of law and order are often blurred, with O’Brien taking matters in to his own hands most of the time and throwing the rulebook out of the window (Oh, and he’s a huge dick). There’s only one likeable character in this whole film and that is Donnie, played by O’Shea Jackson Jr., but to delve any more into that would be quite spoilerific and if you intend on watching the film at any point it’s best you know as little about him as possible. Because everyone else is such an asshat you really don’t find yourself caring about character motivations or their fate. This has likely been done on purpose to demonstrate that the matter of ‘good guys vs the bad guys’ is too simple of a concept, and there are many layers to people. I’ll skip the onion metaphor and just say that if this was the route Gudegast was trying to take then it failed to come across how he intended and just becomes a film where you hate everyone in it.

I went in to the cinema with quite low expectations, but I was actually pleasantly surprised that this film was somewhat enjoyable. It does, however, feel like it overstays its welcome. With a runtime of 2 hours 20 minutes, there is a lot of build for the big heist, and of course to the inevitable final confrontation, but a lot of scenes wouldn’t have been missed had they been cut out. The first act drags a little as character motivations are revealed, but when things get going and plans get put into motion the film becomes enjoyable.  There are a few scenes that give us an insight into O’Brien’s home life, but I couldn’t really care less that his wife and children are leaving him (because, surprise surprise, he deserves it) and these scenes add nothing extra to the film or his character and therefore could have easily been left out.

As Gudegast’s directorial debut, I have to commend his efforts on this film. Whilst it will get a pretty average score from me, I think as a debut it’s a strong effort. However, I can’t help but feel had someone with more experience been in the director’s chair that the film may have been able to deliver some better action sequences and make the twist reveals a little more eccentric and actually surprising.

The cast are fine in their roles; it’s nothing out of their comfort zone. Especially Butler, who really needs to mix up the roles he undertakes. I’m quickly becoming a fan of O’Shea Jackson Jr., after seeing him in his debut ‘Straight out of Compton’, in which he played a younger version of his dad (Ice Cube), he is easily the standout of this film and I really look forward to seeing his future work. Curtis Jackson delivers the most memorable scene of the film, which involves him taking his daughter’s prom date to one side for the ‘dad talk’. This gives Keaton’s ‘dad talk’ in ‘Spider-Man: Homecoming’ a run for its money!

‘Den of Thieves’ has all the makings of a classic heist film, but sadly it doesn’t deliver anything game changing, or even that memorable, and so will inevitably become a film I’ll forget was even released in a few years time.  It’s definitely an enjoyable first time viewing, mostly due to the twist and turns that come in to play, but knowing the outcome of these lessens it’s re-watch value even more for me. My recommendation is wait until it’s home release, or the very likely scenario it lands on a certain streaming platform sometime in the near future.

Come one, come all, and cast your vote in the first annual JumpCut UK Film Awards! Of the 24 categories, three are open to a public vote. See below for details on how to make your vote count.

Which trailer has blown you away this year? Take a look at our top 5 below and pick your favourite.

2015 has brought us some real stars in the making. So which new actor or actress has really impressed you this year and looks to have the brightest future in film?

Sadly, 2015 has also brought us some stinkers! Of all the film flops this year, which film has been the absolute worst of the worst? Here’s our top 5 (or bottom 5, depending how you look at it).

After weeks of agonising over the films of 2015, our esteemed panel have finally submitted their picks for the first annual JumpCut UK Film Awards. The votes have been counted and the nominees are… 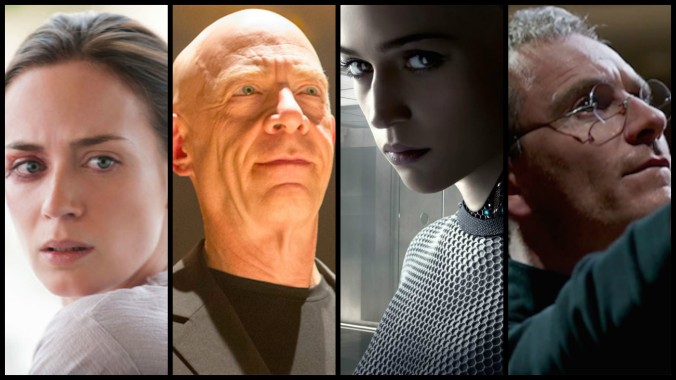 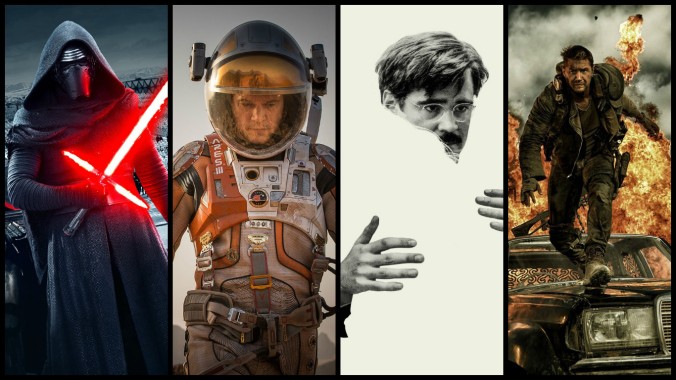 Ex Machina
Inside Out
The Gift
The Lobster
Whiplash

Inside Out
Spy
The Lobster
The Night Before
Trainwreck

Cobain: Montage Of Heck
The End Of The Tour
Kung Fury
The Lobster
World Of Tomorrow

So there you have it – 24 categories with lots of films and individuals to celebrate. We will be opening up the voting to the public for the following categories: Best Breakthrough Actor/Actress, Worst Film and Best Trailer, and you can cast your vote here (voting closes 31st December). The rest of the categories will be decided by the JumpCut UK team, our official partners and a handful of expert guests, with all the winners announced on our special YouTube Awards Show at the end of January.